Yes indeedy, and one I was very happy to twitch yesterday morning, as it was a fine 6-year or so breakback on Senor Old Spoons who'd slipped 3 (presumably the same birds, natch) past me one October when I was away for work. Yesterday he was away for work too so it all kind of evens out...

Anyway, the three (count 'em) tree sparrows were a most welcome addition to my Galley list - happy days!

The wind has gone south-west and blustery so think that might be spring done with? We shall see. Anyway, conditions looked good for a skua-laden seawatch this am, but alas it proved not to be. Did manage to bang in 2 bonxies and an arctic skua but that was it on the skua front. Cashed in storm petrel, a couple of sooty shearwaters and two common terns too, which I don't think I saw last year, so a bit of a bonus there. Just about worth a total soaking!

Sedge warbler today brought up the majik 100 species on the new patch at Squince, and takes me to 81.97% for the year. Happy daze.
Recent highlight along the way has to be a rather stunning Hoopoe I bagged during the week. I'd been thrashing the patch diligently, and had just nailed the first whitethroat of the year. I was happy with that, but felt there was more to be had. I parked up at the south end of the causeway to Myrosss Island, thinking to myself "I'll just check these gardens for a Hoopoe". As I left the car an animated resident waved me down.
"I see from your binoculars you're interested in birds," he was obviously an observant chap. "I've had this strange bird visiting the garden the last couple of days, and wonder, could you tell me what it is?"
He proceded to whip out his phone to show me a shit distant video of what was obviously a Hoopoe. FFS! That was the potential find scuppered. But the important thing now was to nail the bastard.
I checked all the adjacent gardens and drew a blank. So I spread the net a bit wider and... boom! 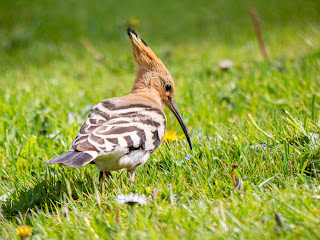 A rather lovely Hoopoe gave itself up for a spell before flying off. Wonderful!

With news out, the following day all manner of folk descended on patch and it turned out there were TWO (count 'em) Hoopoes. It developed into quite the mini-twitch. 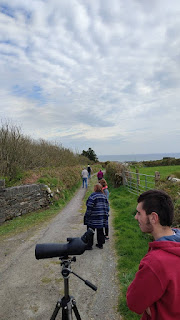 Most West Cork birders managed to see at least one of the available Hoopoes over the next few days, except for Seppy, who somehow managed to dip twice. That's Hoopoes for ya!

In other news, the Proccies roller news honed my observation skillz, and to my surprise and delight I discovered this evidently long-staying roller on patch. Looks like it's here to stay too. 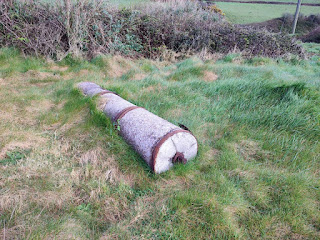 Posted by Basil Faulty at 23:17 No comments:

It's not snowed for at least a week now and the singing willow warbler that greeted me on the 18th, the first warbler of the year, was both music to my ears and marked the arrival of spring here at Longhaven.  Hopefully this will also mark the end of the long drag which is typically the first three months of the year.  Daily plodding around the patch producing few birds and very little of note, indeed there's been no bonus birds the last couple of months with just the regulars trickling onto the score sheet.  March produced 13 patch ticks for the year (11% of my annual target) which is the highest March total ever but was just making up for the lower than normal January and February tallies.  There weren't any highlights last month but I guess if there had to be one it would be stock dove, which are annual on patch but always tricky.

April so far hasn't, as yet, picked up the pace with just six species added to the tally but at least the weather is nicer and May is just around the corner when I'm hoping for an explosion in both totals and rares.

Things are going to have to get better if there's any chance of keeping up with those Irish lads who both seem to be having a good time of things lately and well done to them for their cracking finds.

Currently on 65 species for the year, 54.17% of the total; which is pretty much bang on average.

Posted by Cotehill at 06:03 No comments:

Faulty turns up the goods

Yes indeedy. There are benefits to having a fat lad raiding yer fridge and drinking all yer beer on a weekend, and that was basil faulty picking out a fine summer plumage black-throated diver from the Majik Patio (tm) on sunday afternoon. Only my third evah record for the patch, but some of that may be linked to (lack of) observer effort. A few other bits have been added also, including sedge warbler, yellowhammer, and most miraculously, a singing greenfinch this very morning. All of which brings me to 93 species for the year which is pretty good going, considering I still need a good few common summer migs yet.

Email ThisBlogThis!Share to TwitterShare to FacebookShare to Pinterest
Labels: a bit of movement through the crease, diver dough-nuts, majik patio

And not only full fat patch ticks,but full-on Irish ticks at that! First thing on the morning of the 12th April, a small dark warbler shimmied up a dead nettle stem, spun round a couple of times and dropped back down into cover - the brief but good view was enough to reveal it was a male subalpine warbler, which was just as well, as it promptly disappeared for the next few hours!
However, returning in the evening with a twitchy Basil Faulty proved a good decision, as we managed to refind it again in the same area. After ditching Basil, and getting Old Spoons on the case, the bird finally started playing ball, and gave amayzing views, as well as calling lots too....
In between looking for the subalp, I managed to bump into another full on Irish tick in the form of cracking winter plumage dotterel in a ploughed field at the top of Shite Lane Hill. Amayzing scenes altogether!
Sometimes Galley is totally amayzing! #WhatAPatch
Posted by seppy at 18:14 1 comment:

Birdies, Eagles and Bogeys -- sometimes birding is as shit as golf!

"Look up" is the catchphrase immortalised by everybody's favourite birding pseudo-celeb, David Lindo (The Urban Birder, no less). So I gave it a go recently at The Mall, and lo and behold... 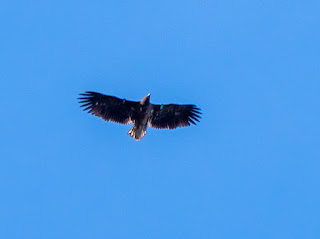 A White-tailed Eagle was circling over the house, much to the chagrin of a couple of local buzzards. Luckily I was out in the garden at the time photographing Siskins demolishing my nuts. I rattled off a few shit shots as the humongous bird wheeled lazily on-high drifting off slowly to the north-east.

News broke, with Seppy scrambling for his scope and making a beeline for the majik patio. He pointed his optics in the approximate direction, and by pure fluke clocked a very large black dot being harassed by a couple of significantly smaller dots.

Bingo! Or was it?

Despite some precedent on this very blog for ticking questionable reintroduced raptors, it turns out my shit shots weren't quite shit enough, and the Irish White-tailed Eagle Reintroduction project lead, on perusing said shots on Twitter, confirmed the bird to be a young male released in Killarney National Park only last August (08/21). Ticking it would be too much of a stretch, even for Seppy.

That just wouldn't be cricket! Or golf, come to that.

Untickable japes aside, it's been steady gains with nothing out of the ordinary on either patch, with the usual spring arrivals trickling in. Squince sits second on the podium with 77.87%, the Mall in third on 68.94%.

Now I just need Seppy to stop dragging me all the way to Galley for Irish ticks (Dotterel and Western Subalp were well worth the spin over, mind you), so I can spend more time trying to find something tasty on my own patch.

Posted by Basil Faulty at 16:31 No comments: