It's been a good little spell up here Dusky, Hume's and Pallas's over the weekend. Not on the patch unfortunately, but nice all the same and you do get fed up bashing your head off the wall after a while and are forced to get your jollies elsewhere. I have managed a couple of new species in the shape of waxwing (2) at the barracks and merlin on the King's Links which is always a good un on the Don. All of which leaves me tantalisingly close to the magic hundred on 99.76%.
Posted by Royzah at 23:14 2 comments:

hoo hoo! With the lake pretty flooded just now, I've been playing a hunch and today was rewarded with a fine kingfisher on a fence post from de house - tricky enuff at Galley, probably get one 2 years out of 3 or so - a good bonus, with the apparent end of the mig season upon us! Although did manage a late swallow from de house mid-morning. Think what I could get if I actually left the building!!
Posted by seppy at 11:31 No comments:

Email ThisBlogThis!Share to TwitterShare to FacebookShare to Pinterest
Labels: bonus bird, getting there, kingy

Good month (for a change)

This is turning into a good month on the patch, after a long spell of dross. Last weekend I too saw a treecreeper (rarer than yellow-brows you know).

But today has been quite spectacular. There were a few common migrants in the village first thing and plenty of blackbirds. I saw 3 little auks flying south during my walkaround - not bad, but not unexpected.

But a flock of geese in one of the road-side stubble fields was unexpected, especially while looking into the sun, I realised that two of the pink-feet had white across their foreheads. 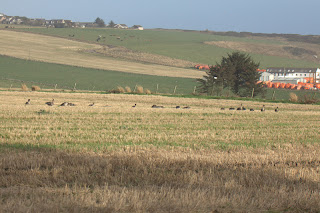 And finally, as I got into better light. I realised that one of the remaining pinkies had yellow legs and a stonking long beak. Hang on, there aren't any pinkies, all of the remainder are beans.

It took me a while to get my head around which race - tundras, but this is the largest flock of bean geese in a long time, and with the white-fronts and a little grebe that flew south during a later seawatch, they were full fat patch ticks. Also had four mergs on the seawatch. 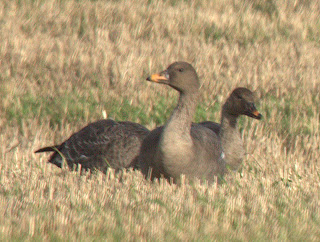 Just what you didn't need really. Caught up with a few bits and pieces that really should have been on by now - Golden Plover, Snow Bunting and Woodcock - and some real quality in the form of a Pink-footed Goose. A full fat patch tick and, I think, the first one I've seen since leaving Aberdeen in 1996 (unless I maybe saw a few on Shetland one autumn). If you think that's sad I witnessed a birder at our local RL Buzzard take a call about a Long-tailed Duck at Dungeness and high-tail it the 15 miles or so to twitch it. It's a different world down here. Anyway, enough preamble, 103.91%. Looks like you're all suffering from doing so well last year.
Posted by Shaky at 23:33 1 comment:

Email ThisBlogThis!Share to TwitterShare to FacebookShare to Pinterest
Labels: how much cock could a woodcock suck if a woodcock could suck cock

Can you count....yes you can

Way back at the beginning of the year I posed a hypothetical question of whether you could count a white-tailed eagle. If lets say one flew past my house. which it now has. A fine immature flying past the house earlier this month is definitely on the list. If its the same returning one that Reg got earlier in the year it is now a good bit older and therefore now tickable... isn't it. anyway I didn't see any tags and a fine patch tick it is.
So aside from that and a treecreeper earlier this week which is good bonus bird for around here there's been nothing much to shout about. Pity as I still have 19 species to get to hit the 100% mark.
At the moment a pitiful 88.32% puts me some way off the leaders board but the 19 species I'm going to get this weekend should help me out.
Happy days
Bushveld
Posted by Cotehill at 23:27 No comments:

Dull weekend on the patch really - patch ticks in the form of single Snow bunting and an impressive 27 Whooper swans migrating over at 2100hrs as I walked back to the car after the firework show.

Just as well I twitched the local rares to brighten it all up then. Desert wheatear at Greyhope Bay late on the Friday afternoon then added to the autumns Dusky haul by going to see one at Balmedie - which was easy to hear but a bugger to see well. Bit of a 'Sibe' chiff there as well too.
T-2006.
Posted by T-2006 at 14:39 No comments:

Three species added since my last update: Yellow-browed warb (2, I'm claiming, one a find), 2nd wint Med gull (find too) and, er, dipper (got that one pointed out to me).

87.62% and currently equaling my lowest ever score at North Don with 118 species (which I recorded on my first year working it).

No bankers left now. Need two species to pass Shaky's current score which should be easy enough but how many more can he get???

Also, during a quiet weekend at the patch, I got to thinking about the overall Blackdog list - i.e. my 187 species and whatever anyone else has seen. Including all dodgy non-submitted claims I know of, it came in at 200, which is a nice round milestone I reckon.

Statto
Posted by Statto at 21:00 No comments: