Breaking records but no prizes

It's been a while since I last posted anything and Seppy has been on my back asking for demanding an update.  The problem being is that there's not been much to say.

November brought in another four patch ticks for the year, the best of the bunch being a long-eared owl caught and ringed.  Since then I've managed another two long-ears, two short-ears and a few barn owls.

My few attempts at sea watching have proven fruitless aside from eider, which are usually got in January.  A snow bunting on the 1st November is less than annual on the patch, so a bit of a bonus bird and great spotted woodpecker is also less than annual and a species during late summer and early autumn, so I thought I'd missed it for the year.

The woodpecker was my 125th species of the year, my highest ever total.

Since the end of November a dawning realisation has crept over me and acceptance that the mallard would be off to pastures new (or a recording studio) and the six species I still need to get in order to avoid the inevitable just ain't going to happen.

Posted by Cotehill at 14:15 No comments:

As with Derek, Tintin and many others, restrictions means we have spent much more time on patch this year. We are at it pretty much every day, and as a pished man once opined, "don't look, don't find". And so it was we found ourselves at the furthest reaches of our patch late on Sunday afternoon as a GOLDEN PLOVER flew over. Full fat patch tick, even if not as impressive as WFG or crag martin (hats off, chaps). I've had big flocks just off patch before when I've been off patch too, but this is the first on patch. This effort brings us to an all time record 91 species in one year, which is 116.17% of previous three years. 28 days to get nine species to break to 100 might be a bit of an ask though, but happy to break 90. 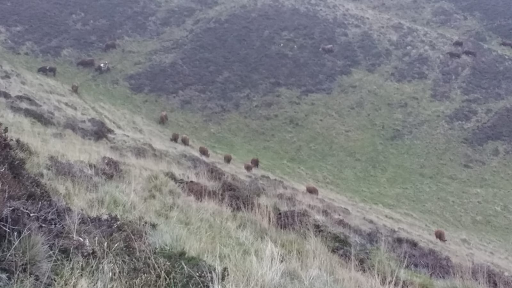 The scene of the find on Sunday just after golden plover flew over. Photo: photographer's own
Posted by The Proclaimers at 12:06 3 comments: