A "Tern" for the better in Clonakilty 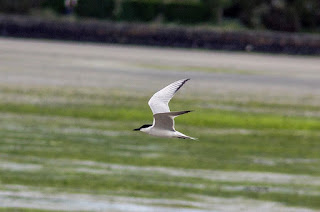 Apologies for being slack with the posts. Its more a case of getting under Seppy's skin rather than sheer laziness. Although laziness has also played a large part in it s is clear from my spelling and grammar,

So the year started off pretty slowly with Cattle Egret and Ring-billed gull being the only birds of note in January. I moaned pretty constantly until April about how crap my patch was with Garganey and a Tufted duck the highlights until then. The only thought that kept me going was "at least i dont have Bazel's horrible inland patch"!

Then in April everything changed. As I looked out in to the bleakness that is Muckross Estuary during in spring, there shone a shiny beacon in the middle of the sand. One lone tern. and as it lifted from the mud and hawked its way towards me I knew straight away (well after at least two phone calls at least) that it was a Gull-billed tern. A rarer occurrence in county Cork than Grey-cheeked thrush i might add! The bird stuck around for a few weeks and there were reports of both Seppy and Basel pleasuring themselves as it they observed it hawking up and down the estuary. Disgusting behavior.

This was followed in very quick succession by a coot ( patch gold) and a find tick in the form of a cracking male Green-winged teal (which should never ever be lumped).

A hat-trick of yank waders got me through the autumn. The highlight for me was a White-rumped sand which was a lifer. This was followed by a lovely Baird's sand and a Semi-P Sand. Tinged only by the fact that I didnt find any of the yank waders ( Except for the semi-p kinda but that a whole other story).

That brings me to 126 species for the year so far and 106%. "Terns" out my patch is actually pretty awesome.

Yup, while getting out the car to head out birding at the weekend we had a jay in the garden. We've had a couple close to the patch of late but this is the first on patch for the year. That brings us to a rather embarrassing 113.36% (or 82 species).

And the dippers have started singing in the garden again too - nothing like  breakfast with a dipper soundtrack. Far better than any soundtrack we've produced.

Posted by The Proclaimers at 09:25 No comments:

Arrived at Boghall and made some preliminary enquiries regarding the infeasibly high percentage score claimed by the Reid brothers. Nothing incriminating uncovered yet... 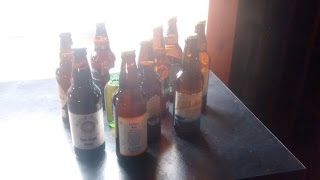