Well I'm back. I noticed mutterings that I needed to post, partly due to totally erroneous claims that I was threatening the top of the  leaderboard. Clearly I've not been anywhere other than in my (non-Covid) fevered mind and clearly it's not been the incredible patch birding that has kept me away from here.

Following the pleasing return of green woodpeckers in April, the spring progressed with typical migrants appearing including wheatear (which according to my very poor records may have been a patch tick), and residents such as hard to find grey partridge and barn owl, which were both squeezed out of the woodwork in April and May. June and July were tedious tick free months before August appeared and delivered the goods with a tree pipit, a patch tick but probably only through  previous piss poor ornithological skills and oversight.

Slithering into September teal reappeared on my beloved newly flooded field before a very welcome pair of golden plover briefly paused on the barren, lifeless wastes of the arable field next to the house.

The list now stands at 101.19% so in no way threatening The Proclaimers, or anyone else for that matter, except possibly through actual numbers of species, but then we'd both be miles behind any of the coastal ponces, struggling as we do on our birdless agricultural wastelands.

That do you? Really wasn't worth waiting for was it?

Yes indeedy, folks have been banging in the year ticks all over the gaff over the last few days, none more so than Big Royzah who after nailing a brent goose and a great northern diver, even turned his hand to a spot of seawatching, scoring his first sooty shearwaters in 13 years! Oooooof!

I was out both days of the weekend, and although it was generally pretty quiet, I did manage a fine coal tit at the Lashers and another, more showy garden warbler on saturday, and then on sunday I bumped into my first yellow-browed warbler of the autumn, as well as a pied flycatcher and the garden warbler again.

Email ThisBlogThis!Share to TwitterShare to FacebookShare to Pinterest
Labels: banging them in, ooo seawatching, tits oot

We should have been on tour on Shetland right now but we decided to cancel all gigs for the good of the public. As we have a hole in our diaries  we decided to do some seawatching yesterday evening. Things started well, and we saw the sea. It got better when gannet was added to the list. It got a bit hazy after that, and we failed to get any sooty shearwaters. However, turning our trusty Meopta S2s elsewhere we noted a good flock of peewit in the regular peewit fields just off patch, and a flock of teal on a nearby pond, also just off patch. Both are near annual on patch, but good to see them fall. These goodies bring us to 88 species, or 112.34%. We hear Tintin is close on our tails with tales of golden showers plovers.

Nice and Jay - Z does it every time

News from Big Royzah (for it is he), of a fine full phat patch tick in the form of one of the greatest rappers of all time, Jay - Z.

Royzah takes up the story himself "Just had a full phat patch tick...Jay! [Z obviously - Ed] Majik! On the path between Royal Aberdeen and Murcar."

When asked why a famous American rap artist was in the vicinity he replied "I think there's jays at Scotstown Moor now, so could be from there, its not far as the crow flies"

a proof-of-life shot supplied below:

I think I'd better leave it there....

I've been grafting away on patch over the last few days - a slave to it in fact. Persistance is paying off though, particularly with waders, including such wonders as a flyover, calling (tho unseen) spotted redshank and just yesterday a fine grey plover on the deck, courtesy of Old Spoons.... 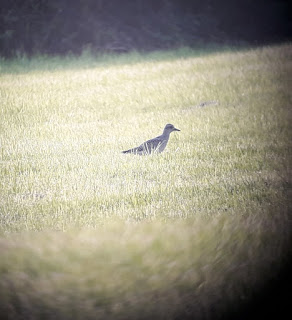 It was a Baird's sand.

It's been a while since I posted anything but alas there's been very little to report.

A very distant Baird's sand' yesterday on the Not So Great Pool was frustratingly too far away to absolutely nail it well enough for submitting to BBRC.  It got flushed by a couple of crows and flew south before I could get across the fields for a closer look.  But it was one, that I am sure.

A grey plover yesterday was a full fat patch tick but absolutely no consolation for the departed sandpiper.

A few other birds trickling through included an Osprey on 12 August which was also a full fat patch tick.  A yellow-browed last week and regular lap bunts in the stubble fields are the best of the meagre pickings.

Still hopeful for a spell of easterlies to bring in some birds but at the moment the patch total for this year stands at 109 species and 96.80%.  Another 13 species would put me in poll position and in some fantasy world of mine it is definitely doable.

Posted by Cotehill at 14:01 No comments:

Got back to the patch after work on friday in time for a quick squizz at the seaweed patch on the beach, in the hope that there was a rare american wader hopping around on it. Unfortunately this wasn't the case, but there was a good sized flock of black-headed gulls frolicking in the surf.  One of them appeared to have a very grey neck as I casually scanned through them from the car, so I jumped out to get the scope on it.

By the time I'd wrestled the tripod legs up, there was no sign of it in the flock. I walked down to the end of the slip and scanned through the flock again - nothing but BHGs. And then I noticed a gull further offshore, on its own. A quick scan with the scope and bingo - there it was!

Although it kept disappearing behind the waves, the grey hind neck really stood out, and although it was on its own, it looked small. The "cheek spot" seemed larger than on BHG, and the white outer primaries were bordered on the rear edge by a neat, thin dark line. The white tail contrasted strongly with the grey mantle and neck, which I thought looked a shade darker than BHG. The black bill was noticeable too, when it turned side on. All the while the bird was flying slowly away from me, into the wind, out into the bay, occasionally landing on the water where it would disappear behind the waves. After eventually losing it, I scribbled a few notes before checking the Collins app before texting a few folk that there was an adult winter Bonaparte's Gull on me patch! Amayzingly lucky to get on it, really.

Since then, there's been a few bits turning up in the run of south-easterlies, the best of which has been reed warbler, and only my 3rd evah garden warbler on patch! All still to play for

Lack of updates = lack of enthusiasm

I haven't been on here for a while, largely due to the patch being dead and me failing to drum up enough enthusiasm to overcome my inertia.

Seppy bleating on about how he'd sailed past me on the leaderboard was enough of a catalyst, and a quick check through the list this morning revealed some regulars I'd failed to count, like Spot Fly, Gropper and Swift, along with a couple of notable (for this patch at least) waders like Whimbrel and Blackwit. I also had my first goshawk on-patch over the summer, which was nice (seen on two separate occasions over the course of a week).

Recent storms and the resulting floods around the lake yielded a green sand and a coot to round things off.

Those additions bring things bang up to date as we head into autumn -- putting me in fourth place behind the front runners. Precious little in the way of certainties left though, so improving on or even retaining that position will be a challenge.

Still, I'm back ahead of Seppy... which of course was the main focus of this update.

Posted by Basil Faulty at 12:54 No comments:

Been oot and aboot a wee bit over the last few days gleaning the odd year tick here and there. A fine green sandpiper over the gaff last week was eagerly ticked off on the year list while a reed warbler on Sunday was my first on the patch for 3 years. With a hint of south-easterlies and drizzly pish last night I was out again this morning nailing a fine pied flycatcher at the Lashers, with spotted flycatcher, blackcap and a chiffchaff as the supporting (non-year tick) cast.