Despite the great conditions for a fall, digging out the migs at Galley has been hard since those goodies turned up last week - did find another wryneck, which was nice, but the only year tick i managed was a lesser whitethroat as dusk fell last night - still - rarer than ybw here!
Posted by seppy at 22:13 No comments:

About time I posted, and no better time...Brown Shrike in Collieston!
See http://colliestonbirding.blogspot.co.uk/  for a bit of an account of the fun.
The winds still in the SE as well, so could be more to come tomorrow.
Off to have a glass of wine and a bit of a rest.
Posted by Reg Hollis at 20:45 1 comment:

back home & back in the groove

After a very successful few days on Shetland, with several members of the Golden Mallard contest, it was back home to Galley and easterly winds! A pied flycatcher at Shite Lane yesterday was new, while today's kwality came in the form of a wryneck  and a juv red-backed shrike. Have a pic... 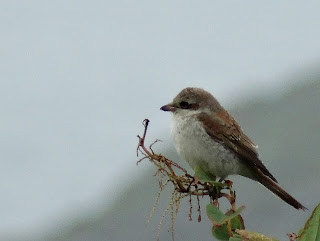 PS Just realised I forgot to tick common tern from the other day - 4th place beckons!
Posted by seppy at 15:44 2 comments:

Email ThisBlogThis!Share to TwitterShare to FacebookShare to Pinterest
Labels: banging them in, ooo migrants, patch kwality

Autumn getting into full swing now. The weather promises a good few days, kicking off yesterday with a brace of Blackdog Yellow-browed Warblers - first here for a few years. Plus a brace of Lesser Whitethroats and, at last, the first Blackdog Chiffy in a couple of years. 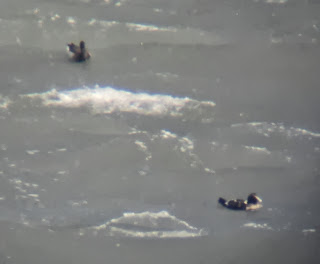 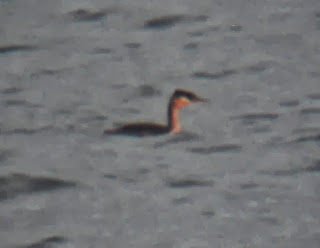 Was "working" just now when a text came in alerting me to the presence of a spotted flycatcher in Dirk - off I went to verify it, and it was one! Yeah! Year tickage! And i get to waste more time blogging about it afterwards! Double bonus!
Posted by seppy at 11:32 No comments:

Email ThisBlogThis!Share to TwitterShare to FacebookShare to Pinterest
Labels: no flies on me, ooo migrants, twitching

A demanding summer of reciting football facts and figures has somewhat gotten in the way of more important stuff such as updating on here. Hopefully normal service (i.e. dodgy digi-scoped pics of distant ducks on the sea) will now be resumed.

Undoubted highlight of the autumn so far was Greenish Warbler on 25 August. Admittedly a corpse could've found a Greenish in the region that weekend. Before finding this bird, I'd dipped Scholsey's first Greenish and Reg's Greenish and then connected with Bushveld's (off-patch) Greenish. Anyway the Blackdog bird cavorted in some willows on the rifle range and became the first Blackdog first of 2013. 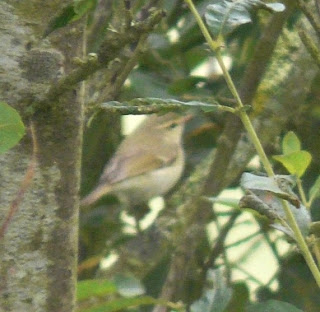 A few other bits and pieces of non-annual - Black-wit, Rockit, Pied Fly and Brent come to mind.

Statto
Posted by Statto at 11:27 No comments:

Boghall does the business again, this time with a full on patch gold tick of hen harrier. Yup, a ringtail cruised its way along the back of Hillend and Caerketton on Sunday, taking bird of the day award from greylag goose which was a year tick (sorry purists). A grey wagtail a couple of weeks ago (and again on Sunday) brings the total to 77, which means 104.05% for us boys. And we had time to work the coast on Sunday too.

The Procs.
Posted by The Proclaimers at 15:55 2 comments:

two (count 'em) spotted redshanks on the lake on monday morning were a full fat patch tick. Interestingly they were there the previous night too but I considered them to only be common redshanks then - but no! Also 3 redpoll flying over this am keeps me nicely ahead of Shakey, by a whopping 0.01% - hoo hoo!
Posted by seppy at 10:59 No comments:

Haven't popped in here for the while... well, it has been hotel silly season, hasn't it?

Nothing much to report either -- all very subdued on the patch front -- like the title says... patch birding of late has been akin to wading through treacle. Very little progress for the (admittedly lacklustre) effort invested.

Black-headed gull was about the best addition to the tally since the last post... until around 7:30 this morning that is, when I was utterly gobsmacked to clock a flock of eight (count 'em) small waders hurtling by the front garden. Luckily I'd had the good sense to grab a pair of bins before going out the front door. Dunlin -- who'd have thought!

That's a big fat patch tick right there... we simply don't get waders. Just goes to show -- anything can turn up anywhere and all that mallarky. Here's hoping for something a bit more exciting over the coming weeks.

Current tally -- 77 species, and more importantly 93.33% for the year. So, back up to third spot on the leaderboard, and surprisingly still first of the Irish ;-).

Another short missive to say that Wanstead is crap, only another bloody Wryneck! Three in four years, it is just ridiculous. Oh, and Tawny Owl to take me to 113 or 101.50%. My patch is on fire at the moment, the next thing you know there will be a Golden Mallard on Jubilee Pond......
Posted by Jonathan Lethbridge at 22:02 1 comment:

pretty fly for a white guy

A cracking red-breasted flycatcher today (my 3rd ever for Galley), plus a reed warbler at Shite Lane - top kwality migrants for Galley!

Email ThisBlogThis!Share to TwitterShare to FacebookShare to Pinterest
Labels: banging them in, ooo migrants, patch find

Scoped a distant soaring buzzard from de patio this pm - about time!
Posted by seppy at 15:39 No comments:

Quick update from Wanstead, where between rehearsals for my latest hit show I've managed to eek out both Spotted and Pied Flycatcher, Tree Pipit, and completely jam a Green Sandpiper. I'm aiming, I'm told, for 111.33 species for 100%. Clearly I can't see a third of a species, so I need a quick rule check. I'm on 98.81%, but would be on 99.10% if I can eliminate the third. Seppy, that icon of fair play, that bastion of parity, that tower of reasonableness, what say you?

a bit of an up & down weekend so it was. Very calm both mornings so was hoping for at least a bit of local migration, if no stuff from further afield. But got nowt in the end. Have spent the last 2 weekend scouring de patch for stock doves - checking every woodpigeon - immensely dull. This has relevance to later in this sorry tale.

Yesterday i spent ages watching some trees cos i thought I'd seen a spot fly at distance. It never reappeared. Immensely dull.

Then I got home and found this on the lake

Exactly! Clearly an obvious yellow-legged gull! Except they all flushed and then i got on an LBB and then got confused, which I still am. Yellow-legged gull would be a patch tick, and, as I am ultra-squeaky-clean when it comes to me patch list, I don't think I can have this as I don't know any of the features. Except it looked like a dark-backed herring gull with yellow legs and a big beak. So I don't know. Its in the "Pending" file, although Big Gav (who once kind of partook in the Golden Mallard challenge, factfans) was threatening to send the boys round if I claim it - he knows about gulls, you see.

Anyway, the upshot and tremendous climax to this long & harrowing tale of woe is that whilst I was dicking around trying to scope the gull, 2 stock doves flew thru the scope! Year tick! Whoop! No more looking at pigeons for the rest of the year! SCORE!!!!!
Posted by seppy at 15:29 No comments:

Email ThisBlogThis!Share to TwitterShare to FacebookShare to Pinterest
Labels: gull fun, no more pigeons for me this year, nobody move - this is a fuck-up
Newer Posts Older Posts Home
Subscribe to: Posts (Atom)