Awarded to the patcher whose year list is highest compared to the average on his patch over the previous three years. The prize itself is a stunning bone china hybrid duck spp, with at least one of the parents appearing to be a bone china mallard. It is reputed to be worth in the region of 50 whole pounds on Ebay, so God only knows what it's worth in the real world but I should imagine it's well into the thousands.

This spectacular piece is currently on show in a glass case at Galley Head, on the mantlepeice of Sepp Blatter. Due to an unfortunate postal error, in which the delivering postman was apparently unaware that he was regularly delivering to 50's throwback Shakin' Stevens, it has resided for the last two years on Cap'n Haddock's mantelpiece. Previous to that it was on one of T2006's speakers, where it endured 12 months listening to Asia, and before that, it gathered dust above the fireplace of Fat Paul Scholes. 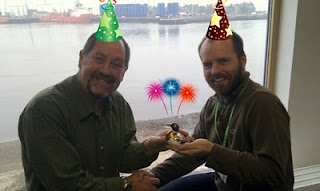 2010 winner, Cap'n Haddock being proudly presented with the beautiful golden mallard, plus fireworks


Speaking at the 2010 awards cermony, Captain Archibald Haddock, the proud recipient of the trophy was quoted as saying “I’m over the moon, I had to focus and gave it 112.71% last year to win the trophy, but it was a game of two halves”, as he visibly held back the tears. He also added “it’s a just reward for all the countless hours I spent slogging around Old Portlethen, peering into peoples’ gardens and hanging around the kiddies play parks. The trophy will have pride of place on my mantelpiece, unless I can get a decent offer for it on eBay”.

Despite it's obvious beauty it is despised by girlfriends and partners the world over.

Funnily enough this goes to the patcher who discovers the best bird on patch. This is decided by a poll open to the whole internet, which is then rigged by Sepp Blatter. The award is some kind of plastic high quality porcelain snowy owl or something....I don't know cos I've never won it. In fact I'm not even sure it exists. If it does, it is currently held by Bushveld on his Cotehill patch for finding a mouse in the grass  Pallas's Grasshopper Warbler in October of last year. 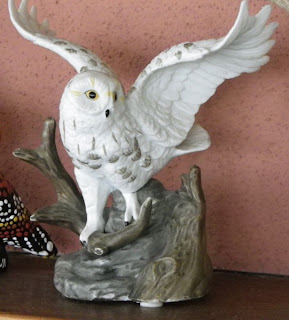 Old Snowy in his natural habitat